Wooly Buggers | How To Fish & How To Tie–This legendary Fly

By Carson Yates
Last Update: April 8, 2022
This post does contain affiliate links—we will be compensated if you buy after clicking on our links.

If you told me I had to fish with only three flies for the rest of my life, one of them would without a doubt be the infamous Wooly Bugger. 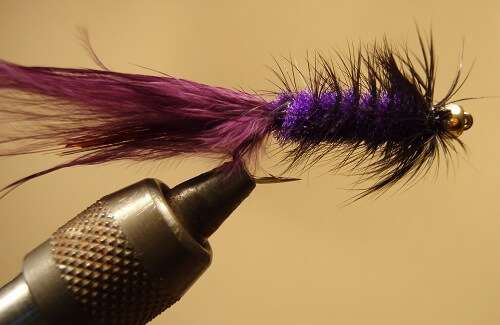 In this article we will look at:

History of the Wooly Bugger

This streamer pattern originated as a variation of the Woolly Worm, an Old English fly pattern which is quite like the classic palmer fly.

Wooly Buggers are said to have been created by Pennsylvania fly tier Russell Blessing in the 60’s, of course no one can ever be sure of the exact time such an iconic fly was invented. 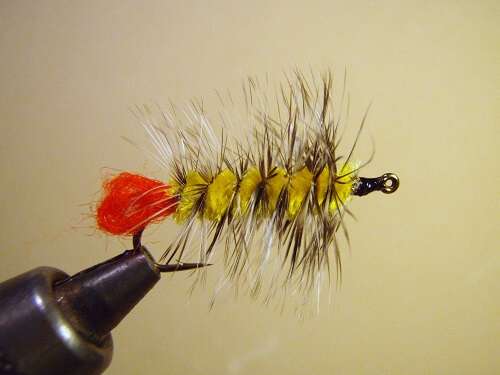 Wooly Buggers originally were tied in dark, drab colors like black and brown to mimic a Hellgrammite, or the dobsonfly nymph. These nymphs are roughly 1-2 inches long, have many sets of legs, and are generally found in shades of black and grey.

These large aquatic bugs are the equivalent of a four-course meal to trout and smallmouth bass.

How to Fish a Wooly Bugger

The wooly bugger can be fished in a wide variety of situations. This is what makes it such a versatile fly. These streamers can be fished as an unweighted variation in swift shallow runs or in a lake around structure and fallen logs.

Wooly buggers are most used when targeting fish that often feed on large insects like hellgrammites, leeches, or bait fish. 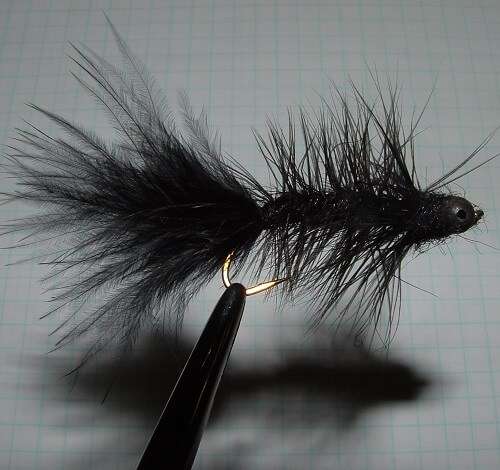 When using wooly buggers to target trout, the most common tactic is to fish this streamer on a swing. This looks like casting the fly upstream or directly across the current, allowing the streamer to sink while mending line upstream.

The streamer will be taken downstream, and the fly is stripped back toward the bank at varying speeds. This motion imitates a bait fish, leech, or crayfish that has floated down stream freely and is suddenly swimming upstream to avoid prey.

Most bites will occur as the fly is floating downstream with the current, so it is important to keep tension on the fly as it is literally swinging in the current. 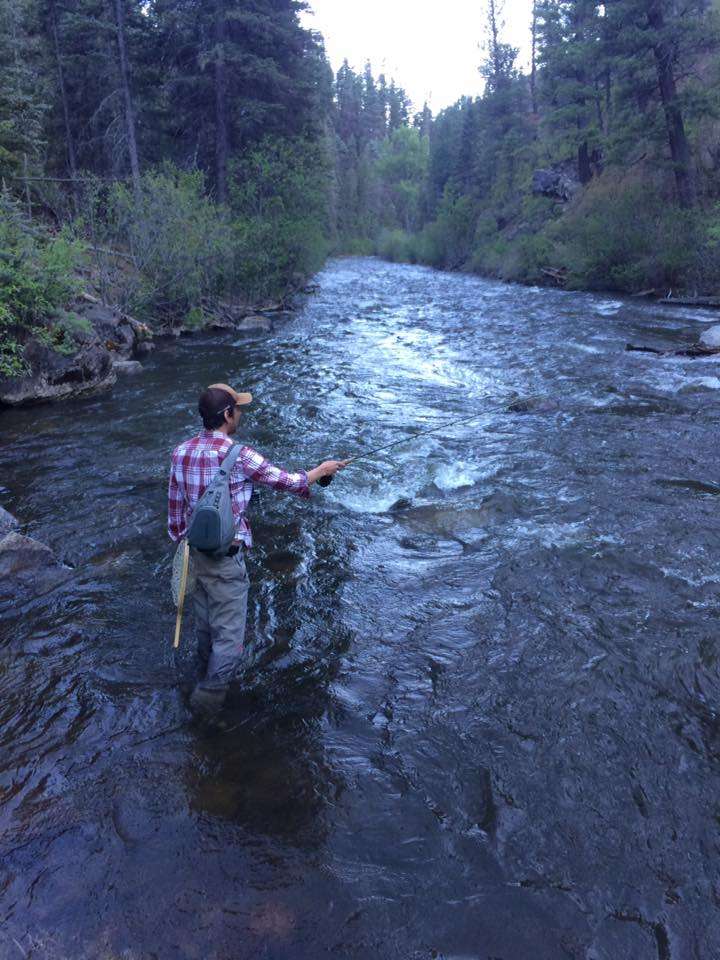 Other variations of the wooly bugger are made with jig hooks and substantially more weight either in the form of a bead head or lead wraps on the body of the hook.

These jig variations are useful when fishing the streamer deeper in the water column.

Casting the streamer upstream, the fly will sink quickly and is twitched or jigged sporadically to catch the attention of fish close to the bottom of the stream bed. Want More Info on How To Fly Fish With Streamers?

Check out our comprehensive article on streamer fishing. Everything you need to know about using this deadly technique.

How to fish warm water species with a wooly bugger

With the variation in size, color, and weight wooly buggers can be used with great success in warm water situations as well. With added flash, rubber legs and occasionally rattles tied on, species like bass, catfish and pike can all be targeted in the right circumstances. 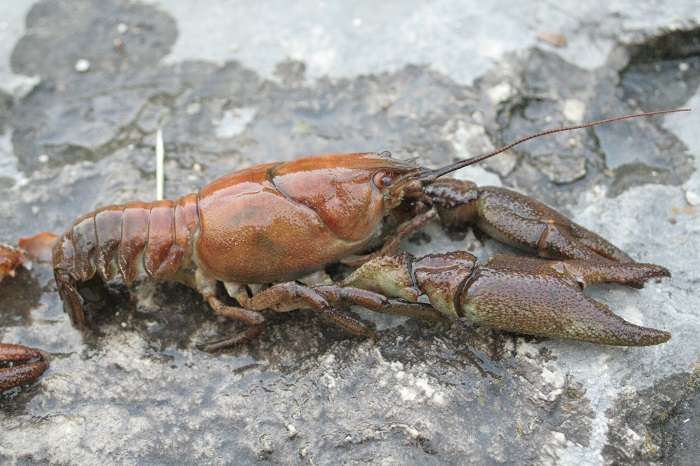 When fishing for warm water fish, the wooly bugger is often imitating crayfish or injured bait fish. These prey items are consistently found close to the shoreline or close to structure.

The amount of weight added to the fly will determine what portions of the water column can be fished and how fast the streamer will sink.

These predatory fish are attracted to movement and the appearance of prey that is wounded. Allow the fly to sink to the desired depth and make abrupt strips separated by long pauses.

Few things are more exciting than a large bass or pike snatching your streamer as it sinks through the water column.

When fishing wooly buggers specifically for trout, size is important. Patterns will range in hook size between #12 and #4 most typically.

The most common colors wooly buggers are tied in are brown, black, and olive. These colors are representative of the crayfish or other large bugs found in mountain streams and rivers.

Wooly buggers can be tied in every color of the rainbow from chartreuse to red, even purple. Much of their attraction can be attributed to the fly’s swimming action and retrieve.

When fishing on overcast days or in muddy water, Darker colors are ideal.

Wooly Buggers can be tied in every color of the rainbow

Check out our articles on Fly Tying:

How to tie a Wooly Bugger

Wooly Buggers are tied on streamer hooks with shanks roughly twice the length of the gap of the hook. Weight can be added with the use of beads, coneheads, ample lead wire wraps or the streamer can be fished weightless depending on preference.

Begin by applying your weight of choice and laying down thread wraps along the shank of the hook, ending at the beginning of the bend of the hook. According to your chosen color scheme, tie in a bushy marabou tail that is the length of the hook shank.

A thick tail of marabou will maintain its figure while providing the swimming action desired in these streamers. 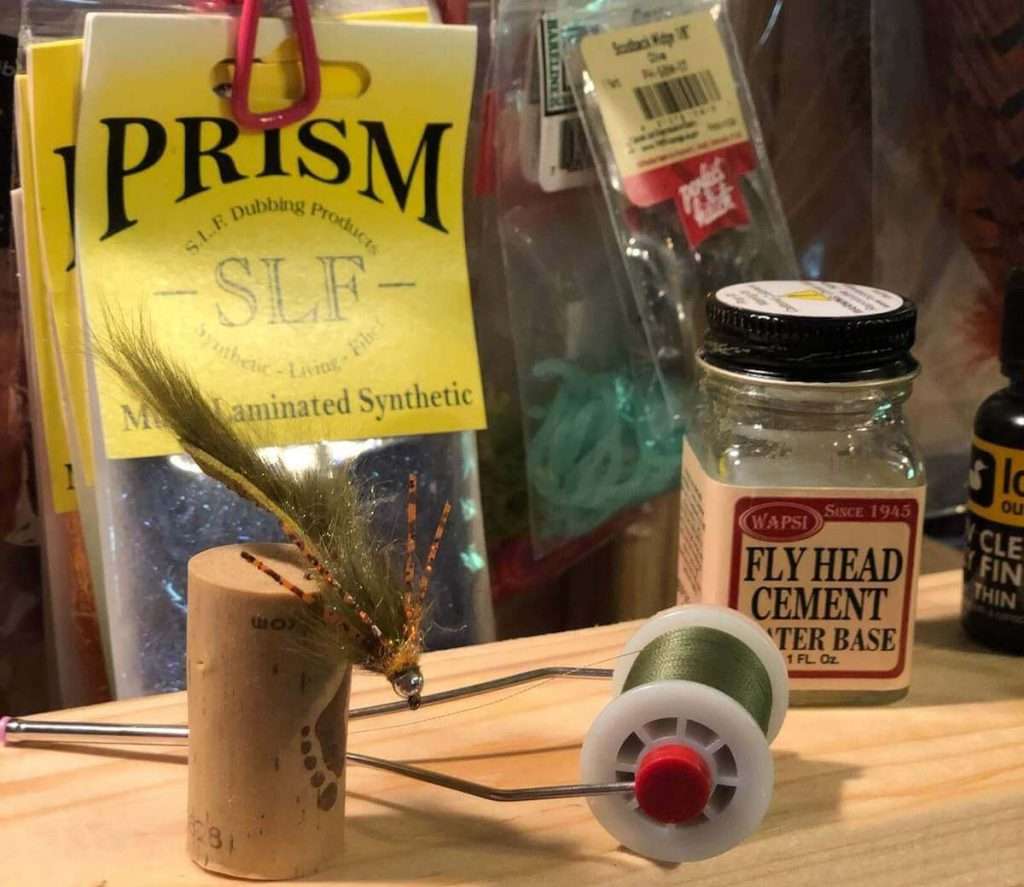 Next, add in a holo-flash or strand of peacock hearl to create a reflective lateral line along both sides of the tail.

Once your tail feathers and flash are secured, tie in the according color of chenille, size your chenille according to the size of the hook; small for hooks 14-10, medium for hooks 10-6 and large for hooks size 6 and larger.

Some chenille is flashy, others drab and monochromatic—choose your chenille based on the overall scheme of your fly, a little flash can go a long way. Along with the chenille, tie in the tip of a single schlappen hackle feather (a wide, webby feather from the tail of chickens).

Finally, tie in a strand of wire to secure the hackle and chenille. With these three materials tied in at the bend of the hook, begin by making touching wraps with the chenille until reaching the eye of the hook.

Leave at least two ‘eye-lengths’ between the chenille and the eye of the hook for streamers without bead heads. Once the chenille is secured, make spaced wraps with the hackle in the opposite direction as the chenille, finishing at the same place as with this chenille, securing the feather to the hook.

It is worth noting that by tying in the tip of the feather rather than the base, the length of the hackle fibers increases as you approach the eye of the hook, creating a naturally tapered profile.

With the hackle feather secured, make spaced wraps in the same direction as the chenille (opposite of the hackle) until reaching the eye of the hook, making sure not to trap any hackle fibers. 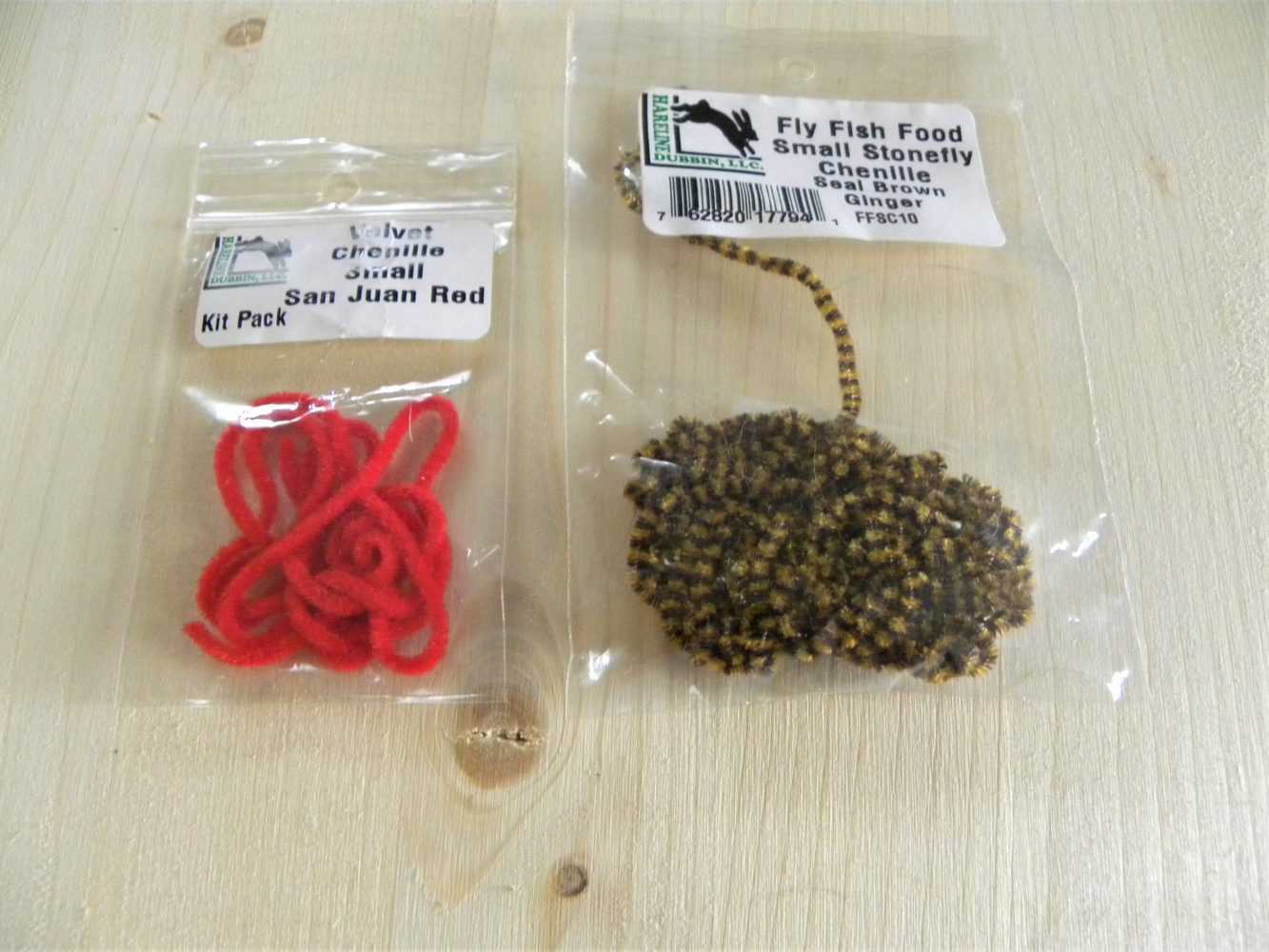 A little flash in the Chenille can help make your Wooly bugger Pop!

This wire addition will drastically increase the lifespan of your wooly bugger, as the teeth of hungry trout can do a number on hackle feathers.

After securing the wire, the streamer is essentially finished. Make a couple whip finishes to secure your thread and you are done! Surprisingly simple, and so effective.

It may not be surprising that this classic pattern has had a few facelifts in the last decade or so. In the world of fly tying today, it seems that there are a-thousand-and-one ways to tie up a wooly bugger.

My two personal favorite variations of this classic pattern are the Rubber Leg Wooly Bugger and Articulated Wooly Buggers. I am a sucker for anything with rubber legs tied on and, in my experience, it seems that the fish feel the same.

I often try to tie in legs that contrast with the overall color of the streamer. For instance, if I am making an all-black or brown bugger, I use white or chartreuse rubber legs to create a dramatic contrast in the fly’s color scheme. 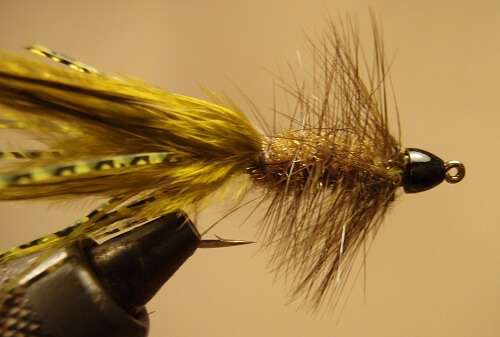 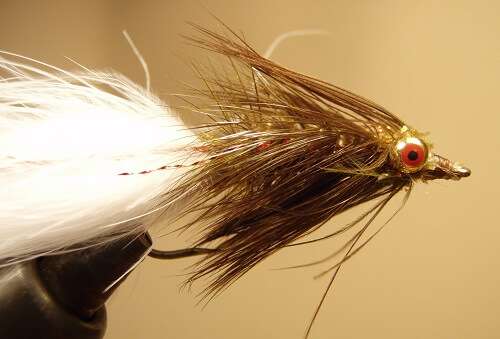 There are endless Wooly bugger Variations 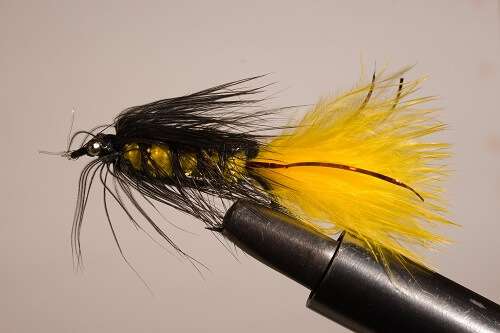 When it comes to adding rubber legs to streamers, avoid short and stubby but try not to leave the legs longer than the body of the fly itself, both tend to look a tad unnatural when the fly swims through the water.

My second favorite variation of the wooly bugger is an articulated variation. Articulated flies consist of two separate shanks joined together by a piece of wire or another junction. This junction creates a very natural swimming motion, adding a substantial amount of action to the fly as it swims.

Articulated streamers are the cousin to swimbaits in the spin casting world. When tying the articulated variation of this fly, the main body of the fly is split between the two hook shanks, with the marabou on the rear shank and most of the hackle on the front shank. 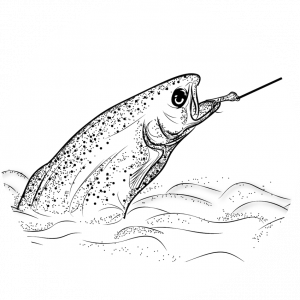 This variation is so attractive to me because it can still be made in any size hook you can think of. As a matter of fact, one of my most successful streamer patterns is a size 12 articulated olive wooly bugger!

Whether you are a fan of the classics or have become interested in expanding your repertoire of streamer patterns, woolly buggers should probably be occupying some corner of your personal fly selection.

They can be fished in every part of the water column, all forms of water and for a multitude of fish species. Wooly buggers also tend to be the best flies for beginner fly fishermen, due to their versatility they are normally the gateway fly for anglers getting into the sport.

All that being said, the wooly bugger can be tied and fished to fit a wildly expansive list of circumstances and styles, which is much of the reason it hold a top seat in my list of must have flies. 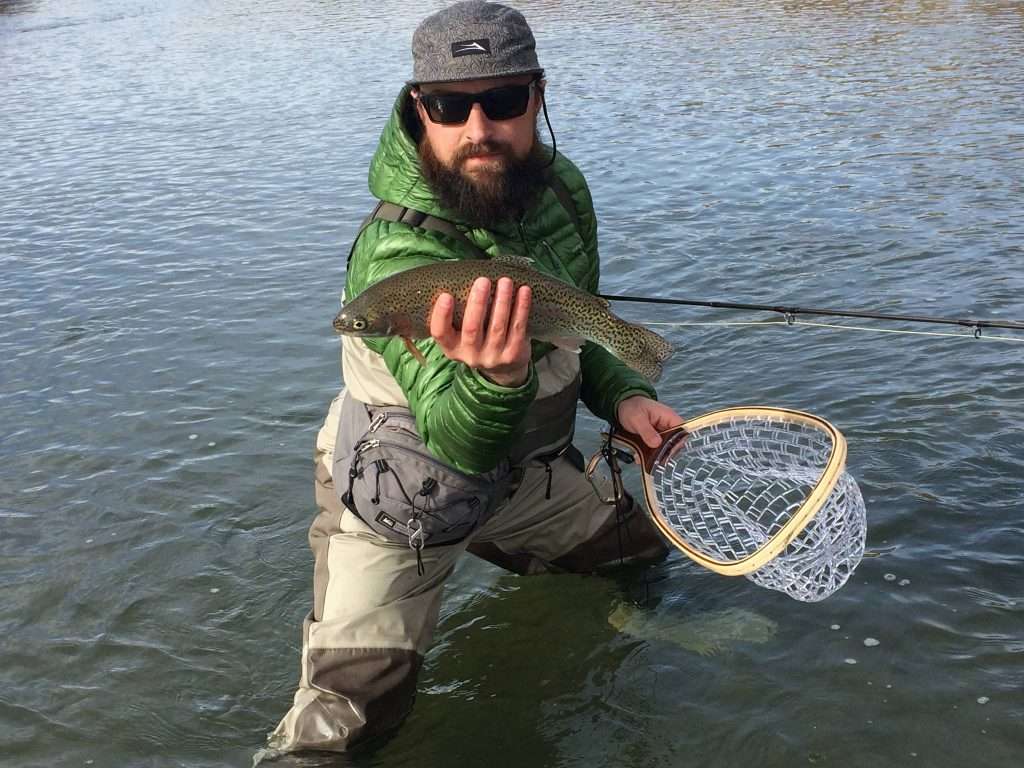 Thank you for reading our article on wooly buggers. We hope you learned some useful information on this staple fly.

Please feel free to leave us a comment with your feedback. 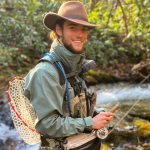